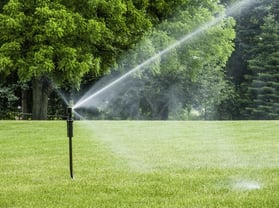 LECO recently concluded a webinar series on agricultural applications of our instruments with a presentation by Dr Frank Dorman of Dartmouth College, Department of Chemistry, formerly of Penn State University, Department of Biochemistry and Molecular Biology. While at Penn State, Frank worked on an environmental forensic investigation of wastewater applied to agricultural fields.

While there are a broad range of chemicals regulated and routinely monitored in agricultural use, the WHO released a publication estimating that around 1/4, and perhaps as high as 1/3 of all human disease is caused by environmental exposure to chemicals. Most of these disease-causing chemicals are unknown and unregulated. As a result, a lot of research is done into searching for compounds of emerging concern (CEC) that could potentially be biochemically active.

Using a variety of Pegasus® GCxGC instruments, including the BT 4D and the HRT+ 4D, Frank's team found some unusual chemicals. The NIST library matched them as chlorophenylcyanates, but they did not actually match the results generated from testing isocyanate standards. Instead, through additional work, they were able to identify these unknowns as chloromethylbenzotriazoles. Taking their search a step further, they learned that these were used in a corrosion inhibiter applied as a treatment to cooling towers on campus. However, very little is known about the toxicity of these molecules or how they react once released into the environment.

While high in concentration in the spray field samples, these molecules were not found in the groundwater. While this indicated that the living filter was doing its job to filter out the potentially harmful molecules, the next question for Frank and his team was: Where did they go?

To learn more about how these chemicals got into the water to begin with and where they ended up, watch Frank's recorded webinar.