Our friend Jef Focant presented on his GCxGC-TOFMS work in dioxin measurements in a recent LCGC Editor’s Series webinar. Jef is the head of the Chemistry Department at the University of Liège, Belgium and understands the challenges of dioxin analysis in foods and feeds. The measurement of dioxins and dioxin-like compounds in food and feed (ingredients) is an important task within the EU food safety policy. It has been heavily documented and described in detail in official EU Regulation documents for the last 20 years. Such measurements require the best available gas chromatography–mass spectrometry (GC-MS) technology in terms of sensitivity and specificity.

Both gold standard sector MS and triple quadrupole MS analyzers, performing in isotope dilution (ID) mode, are used as confirmatory tools for precise and accurate measurements under the EU legislation. The required sensitivity is achieved by performing in selected ion monitoring (SIM) or selected reaction monitoring (SRM), limiting the measurements to the specific target analytes for which EU maximum levels were established. Comprehensive two-dimensional GC coupled with time-of-flight MS (GC×GC–TOF‑MS), acquiring all masses within a defined mass range, has been used for dioxin measurement in the past, but was suffering from limited sensitivity at the high femtogram level, despite the zone compression effect of the modulator. In this talk, we discuss the use of a new generation of GC×GC–TOF-MS systems for targeted and non-targeted measurements of dioxins in food and feed samples. 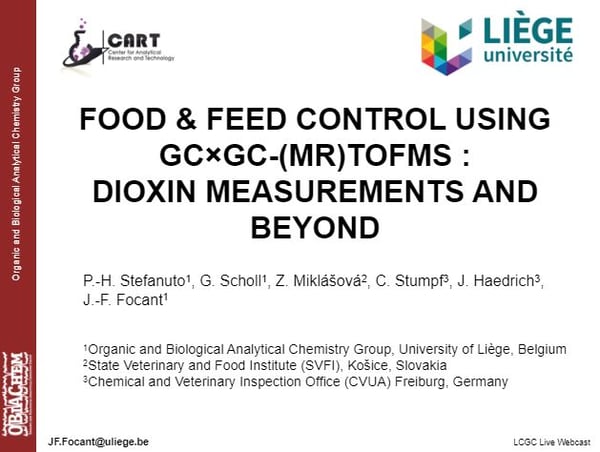 Being pushed to do more with less everyday can leave your laboratory stressed, frustrated, and overwhelmed. We understand your challenges and know how valuable your time is. Our instruments provide fast, accurate, and reliable results for millions of samples worldwide every year. Tell us what samples you're running and why. We’ll show you a way to improve productivity and achieve success.

Our support is available to help you 5 days a week.
Monday to Friday
8am - 5pm EST
Saturday closed
Sunday closed
Copyright © 2019. All Rights Reserved.