How do you handle the analysis and characterization of a complex sample like whisky*? In a recent interview with eFood Lab International, Dr. Geraint (Taff) Morgan of the Applied Science & Technology Group at the Open University, UK, says a 1D quadrupole GC-MS is sufficient for routine analysis, but when he really wants to dig into the non-target analysis of a complex sample, he turns to GC-TOFMS and GCxGC-TOFMS, such as that employed by the LECO Pegasus® BT 4D.

"There are some significant benefits," Morgan told eFood Lab International. "The GCxGC approach uses
both orthogonal chromatographic separation, from the use of different stationary column phases, and thermal modulation which results in both increased sensitivity and enhanced chromatographic resolution." By employing every tool at his disposal, Morgan is able to tease apart the layers of compounds in his whisky samples to find what is actually in his sample. 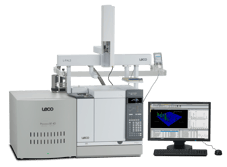 The biggest problem Morgan has run across with his work, he said, was actually the sheer amount of data that comes out of analyses using the Pegasus. The volume and quality of information obtained is so rich, in fact, that he requires specialized software tools, such as ChromaTOF® and its automated deconvolution features which quickly and confidently aid non-targeted peak finding. Additional tools, such as ChromaTOF Sync and ChromaTOF Tile, help speed up the analysis and increase confidence in the results. Sync (for 1D-GC) and Tile (for GCxGC) are able to compare sets of multiple sample data simultaneously, highlighting trends and identifying similarities and differences in a fraction of the time it would take a human scientist to comb through the same data. When it comes to whisky, this is especially important.

As one of the world's favorite liquors, whisky can command a high price and is highly enticing to people interested in making an easy profit. Adulterated or substituted whisky is frequent enough to cause safety concerns for defrauded consumers and loss of revenue for genuine producers. Testing laboratories around the world need fast, easy, and effective ways to handle non-targeted analysis of whisky samples, an application the Pegasus BT 4D excels at.

Fill out the form below to see LECO's latest app note on using ChromaTOF to run non-targeted analysis on several whisky samples.