The Grimm Lamp is the geometry of choice for spectrochemical analysis of solid materials with glow discharge. The basics of this design originated in the late 1960s when Werner Grimm of RSV Präzisionsmessgeräte GmbH in Hanau, Germany developed the lamp. As this year is the 50th anniversary of the patent for this technology, it is helpful to explore the insight that led to the invention and how it still applies today. 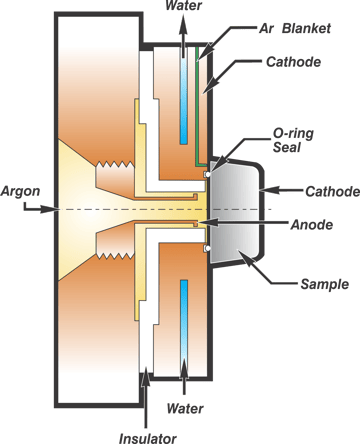 Our own modern glow discharge lamp holds many similarities to the original design by Grimm, including water cooling in the cathode plate, front coupling of the cathode plate to the sample, small distances between the end of the anode and the sample cathode, and the same direction Ar flow, as seen in the image on the left. However, further advancements have been made over time, of course.

One of the most obvious differences between the lamp built by Grimm and those used in modern instruments are the reamer and facer assembly that automatically cleans the source between analyses. Another major change to lamp architecture has been to include radio-frequency power for the analysis of non-conductive samples. For instance, our RF discharge lamp design includes only a small ring electrode around the O-ring to power samples, whereas our DC discharge lamp still has many similar features of the original Grimm design.

Other updates have been made to the Grimm lamp over the years, and as time has gone on importance has further been stressed on lamp control and monitoring of the discharge parameters. Lamp control and monitoring become more critically important when RF power is used due to many sources of power loss between the power supply and the lamp. Our glow discharge team here at LECO has spent a great deal of effort to characterize these losses and develop mechanisms for calculating these losses in real time during analyses to measure and stabilize the discharge parameters. This method, known as True Plasma Power® is the critical step in our accurate application of RF power, and is what allows for accurate characterization of both depth and composition of nonconductive materials.

Read more about the evolution of Grimm lamp technology and how it still applies today in our poster: "The Grimm Source at Fifty: In Glow Discharge Spectroscopy, It Still Starts with the Lamp" Our new glow discharge atomic emission spectrometer, the GDS900, further bridges the gap between old and new technology, still using certain elements of the original Grimm lamp source design of 50 years ago, but introducing a number of state-of-the-art features to make your metal matrices elemental analysis easier than ever. Our user-friendly Cornerstone® brand software is also brought to the platform for increased usability, simplified reporting, and streamlined analysis times.