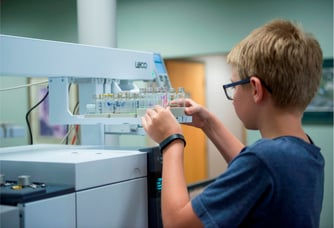 Do you have leftover jelly beans from the Easter Bunny’s visit on Sunday? Jelly beans are one of those unique candies that can be somewhat addicting and also a game of surprise as to what flavor you may get. Is the pink color bubblegum or strawberry flavored? Is the green sour apple or grass? Jelly bean flavors have gotten more and more unique over the years, and sometimes tasting them can be quite the gamble. Because of this, and in conjunction with Bring Your Child to Work Day (a national event in the United States), our application chemists decided a fun experiment would be to “taste” these jelly bean flavors using GC-TOFMS.

Due to the national event of Bring Your Child to Work Day, the intent was to create a safe experiment where children could take part, and our Pegasus® BT was an ideal GC-MS to use due to its ease-of-use and analytical capabilities. As part of the experiment, children participated in a game, taking turns selecting jelly beans from one of several visually identical pairs. Each jelly bean pair had either an appealing or appalling taste, and the suspense of the taste was evident—though two jelly beans might both be a similar shade of brown the “good” flavor was chocolate and the other turned out to be dog food!

After tasting their selections, each child quickly realized there was no way to successfully predict which jelly bean was the safer flavor to eat just based on its appearance. In the second part of the experiment, the children were allowed to prepare and analyze a portion of their jelly beans using the Pegasus BT GC-MS, and use the data to assist them in making their pick between the two seemingly identical flavors. When using the GC-MS data, the children were consistently successful at selecting their preferred flavor, therefore there were no weird taste surprises!

Overall, the Pegasus BT was used to effectively differentiate the exotic flavor profiles of jelly beans, and the children were exposed to analytical chemistry in a fun and educational way! Read more about the experiment findings in the following application note.