LECO's Separation Science division has been seeing a lot of growth, and with that growth grew a new Global Application and Development Director! Nick Jones sat down with Measured Science host Andrew Storey to discuss LECO's GC-MS technology and why Time-of-Flight Mass Spectrometry (TOFMS) is the future.

Nick first learned about LECO through his 10+ years of experience in the fragrance and cosmetic industry working for Unilever. Nick learned from some of the best in the GC-MS industry, training on the LECO Pegasus® instruments. Like Andrew, Nick was impressed by the ease of use of the instruments and support provided by LECO. By building relationships with LECO staff over the years, it was easy for Nick to make the transition from using LECO instruments to providing them.

LECO's TOF mass spectrometers use a concept that was initially described by J. J. Thomson in the early 1900s. TOFMS was proposed in 1946 by W. E. Stephens, but it's only been recently that computing power has caught up to the technology used to run these analyses. With the improvement of technology has come the shrinking of the instruments, with the Pegasus BT instruments now benchtop models with all the benefits of TOFMS packed in a small body. 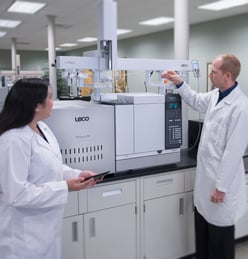 Nick has been enjoying watching GCxGC technology become more mainstream. It is no longer relegated to universities doing "weird and wonderful" experiments, but now routine analyses can take advantage of the second dimension, which, Nick says, can only really be done correctly in the most optimal way using TOF technology.

TOFMS already benefits from the higher sensitivity while looking at the full mass range of data, meaning you can see everything in your sample all of the time. There are no compromises or choices that need to be made, unlike with traditional scanning instruments like quadrupoles. Taking it the step further to GCxGC means that you get better quality separation, increased sensitivity, and can generate better quality data across various sample sets, allowing for faster interpretations of the data with higher confidence.

To listen to Nick and Andrew discuss how this sort of full spectrum data is beneficial using performance enhancing drugs in sports as an example, or for more discussion on TOFMS and Nick's new role as Global Director, check out our latest episode of Measured Science today!