What's Behind Your Beer's Aroma This St. Patrick's Day? 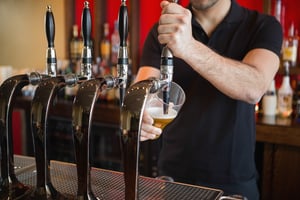 St. Patrick’s Day is an annual feast day celebrating the patron saint, St. Patrick, and is a national holiday in both Ireland and Northern Ireland. The holiday, taking place on March 17th, has a number of traditions associated with it here in the USA as well—wearing green, eating the traditional Irish corned beef and cabbage, the Chicago River is dyed green every year, various cities have celebrations (NYC’s parade features over 250,000 marchers)—and then there is beer.

Beer has long been a popular indulgence in St. Patrick’s Day celebrations, and some believe this is due to the Catholic Lenten restrictions on eating and drinking being lifted for one day on the holiday, therefore beer became a staple. And consumption is high, according to WalletHub, 152.5% more beer is sold on St. Patrick’s Day than usual! If your St. Patty’s celebration will include beer, consider this—why does your beer have a certain aroma? Most beers tend to have a unique, yet distinct, scent surrounding them; some smell bitter, some sweet, others rich or heavy. There is undoubtedly a connection between your beer's aroma and its taste and flavor, so investigating what is actually in your beer, or what is the cause of these aromas is a relevant analysis. GC-Time-of-Flight Mass Spectrometry has been used in a number of beer-based applications to analyze the aroma profiles of beer, uncovering off-flavors and adulterants which can help with quality control and lead to a more pleasant experience.

Beer Aroma: Detection of Analyte Differences with GC-TOFMS and the Reference Feature in ChromaTOF®

In this application note, GC-TOFMS with ChromaTOF software was used to determine the differences between commercially available craft beers, specifically a stout and a coffee-flavored stout. Non-targeted volatile analysis characterized these beer samples, but it was hard to see the distinctions through a mere visual comparison of representative TIC chromatograms due to the many similarities of the two samples. This is where ChromaTOF software can be utilized. Using Automated Peak Finding and True Signal Deconvolution®, the two coeluting analytes could be compared independently with the “Reference” feature. Read more about this analysis to find out how the reference tool in ChromaTOF was used to uncover what else was hiding in the beer samples.

Profiling aroma analytes by GC-TOFMS offers a non-targeted analysis of the volatile and semi-volatile components for a comprehensive understanding of what is in your sample. Here, a variety of commercially available craft beer styles were characterized and compared using GC-TOFMS, which was used to investigate the similarities and differences between Pale Ales, India Pale Ales, and a Double India Pale Ale. Read more about this analysis and get a better understanding of what sample components can be useful for quality control, brand awareness, creating a sensory experience, and product development.