When the TruMac® Macro Determinator at the Southern African Grain Laboratory (SAGL) needed to be replaced, laboratory manager Jolanda Nortjé returned to LECO for an updated solution. For the past twenty years, LECO had been providing the SAGL with excellent service support, and their TruMac and previous nitrogen analyzers had been LECO products they were very satisfied with. At the end of 2019, trusting LECO again, the SAGL purchased a LECO FP928 to replace their TruMac. 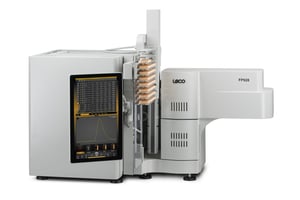 Right from the start, Nortjé was pleased with their choice. Their previous excellent service from LECO was repeated with the commissioning of the new FP928, and the personnel who first began training on the new instrument picked up the work quickly due to the similarities with previous instruments, which they had worked on for years, and the new Cornerstone software.

"The Cornerstone software was overall relatively easy to grasp. The software is user friendly with improved troubleshooting capability, as well as statistical functionality and data processing."

Though COVID-19 put future training on hold, preventing less-experienced analysts from learning the FP928, Nortjé was already reporting noticeable savings from the upgrade.

Nortjé found the significantly improved repeatability and reproducibility of nitrogen readings offset the cost of the oxygen and reagents used in analysis. Even on difficult samples, such as sunflower, the number of samples requiring a repeat analysis due to duplicate analyses being out of tolerance was greatly reduced, which led to more savings.

The savings from the FP928 weren't just financial. The number of samples that can be analyzed before replacing reagents or repacking glass columns has increased due to a higher volume of tubes and columns. Analysts can therefore spend less time preparing the instrument and more time analyzing samples. Not only that, but the sample throughput was doubled compared to the TruMac with the FP928's "hotel configuration" of the autoloader.

Altogether, Nortjé was very satisfied with their experience with LECO over the years and with the SAGL's new FP928 over this past year.

"SAGL has received excellent service support from LECO over the past twenty years and this is one of the main reasons why the FP928 was our instrument of choice when the TruMac had to be replaced. Support during the commissioning of the FP928 was also very good. A LECOService Contract provides additional peace of mind that assistance will be readily available."

Thank you, Jolanda Nortjé, for sharing your experience with us!