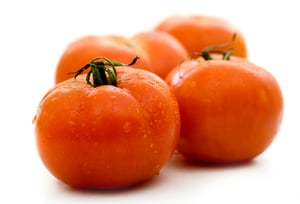 Tomatoes are the second-most important vegetable crop in the world (arguments over whether or not it should be called a fruit or a vegetable aside!), and thus it is critically important that tomato yields are kept high. Pesticides are the easiest way to control populations that might destroy crops, but we must make sure that the resulting tomatoes are not contaminated. With GCxGC-TOFMS, recognizing and identifying pesticide residue in tomatoes is easier than ever.

A team of LECO's experts analyzed peeled tomato extracts to describe a GCxGC-TOFMS workflow that could handle the huge amount of matrix interferences encountered in the sample, even after a traditional QuEChERS extraction followed by a clean-up step. The two-dimensional analysis enabled coeluting analytes to be separated and identified with no confusion.

The tomato extracts (provided by a customer) were spiked with a standard mix of 164 pesticide residues provided by the same customer. All 164 pesticide residues were identified, along with 2100 non-target peaks with a spectral similarity score higher than 800/1000. Even while collecting data for trace level quantitative purposes, the Pegasus BT 4D can easily perform non-targeted screening of samples. No additional sample preparation or runtime is necessary. This non-targeted data can be used at a later stage for analysis of newly-regulated pesticide substances or for different types of evaluations, such as the determination of Volatile Organic Compounds (VOCs).

For more detail on how this analysis works, check out the full application note.