How does beer age? Watch our on-demand webinar, which investigated the shelf-life stability of IPAs!

IPAs are one of the most popular beers in the United States, but what is an IPA exactly? IPA stands for India Pale Ale, and what makes it unique is the abundance of hops, which tend to be a bit bitter to the taste. Despite an IPA's unique flavor, they continue to gain popularity each year with sales increasing by $176 million in 2017 alone, according to The Beer Connoisseur. Clearly, love for the bold beer is strong, yet say you buy a six-pack and save it for a special occasion—how long will your beer last before it goes bad? 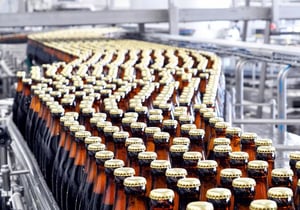 Beer in a bottle is a complex and dynamic system. After bottling, chemical reactions such as oxidation, degradation of proteins and other molecules, continued yeast activity, and others can still occur, causing flavors to fade and/or appear over time. With hop-forward beers, such as IPAs, this can lead to product degradation, where the common fruity or flowery flavors fade.

One distinguishing characteristic of IPAs is their strong aroma, with common scents like citrus, pine, and flowers. There is undoubtedly a connection between your beer's aroma and its enjoyable taste and flavor, and when beer goes bad the scent can smell "off". Many IPAs have labels on them such as "keep cold" or "drink by XX date". The beer’s aroma might be able to give us a clue as to its aging, yet because this is usually based on a sensory experience it is hard to measure. This is where Gas Chromatography Time-of-Flight Mass Spectrometry (GC-TOFMS) comes in. It has been used in a number of beer-based applications to analyze the aroma profiles of beer in a chemical analysis. GC-TOFMS separates, identifies, and quantifies individual analytes in complex mixtures, and in this case can uncover off-flavors and adulterants in the beer.

Check out our free, on-demand e-seminar, where GC-TOFMS investigated the aging of beer! Non-targeted chemical analysis approaches, like GC-TOFMS, help to provide more complete aroma profile information. Our Pegasus BT GC-TOFMS system was used, providing full m/z range data and sensitivity which make it ideal for screening target analytes and/or general unknowns. The goal of the research was to combine the sensory data from a collaborative brewery's panel with chemical analyses from GC-TOFMS, while also investigating shelf life stability and how storage conditions, such as temperature, play a part.