Frank Dorman, an Associate Professor of Biochemistry and Molecular Biology at Penn State University, spoke at our ASMS breakfast seminar about his experience using our Pegasus BT 4D benchtop GCxGC-TOFMS to analyze environmental contamination in the Susquehanna river. Due to the increasing chemical complexity of the environment, GCxGC-TOFMS with its Non-Targeted compound analysis is the ideal technology for these intricate samples.

In his presentation, Analysis of Environmental Contamination in the Susquehanna River, Frank details the contamination of the watershed. His research focuses on the exposome and the molecules that are created when man-made materials interact with it. How can we proactively “discover” exposure issues? Fish contamination is the benchmark indicator species for this analysis and tracking their mutations, or macro and microscopic diseases, not only helps to determine where to place the blame, but also how to solve this before human health is negatively impacted. The team’s ongoing work using two-dimensional gas chromatography time-of-flight mass spectrometry has been a vital tool in investigating this fully.

Frank explains his reasoning why he chose GCxGC to analyze these samples over that of LC or GC.

This means not only are they able to identify the known knowns, but also discover known unknowns in the sample, which is something that other technologies fail to do at the same level.

“The BT has really nice sensitivity. One of our initial questions was, 'Alright BT, how are you going to do when we throw some nasty fish extract at you?' and, I’m happy to say, it does quite well. It does have the ability (because it’s a standard electron ionization source) to handle high amounts of contaminants in the extracts.”

Having the sensitivity to handle these complex samples is of the utmost importance because there is no such thing as “clean” fish. Furthermore, the Pegasus BT 4D’s ChromaTOF® brand software is designed for advanced chromatography data processing such as this. It features tools like NonTarget Deconvolution®, Target Analyte Find, library searches, and more to identify more analytes than ever before.

When it comes to detection limits, Frank explains that the BT 4D was able to outperform a number of more traditional types of mass spectrometers, as they were a couple of orders of magnitude poorer in terms of detection limits. Additionally, if this same analysis were to be attempted on a single quadrupole, detection limits would suffer even more. In comparison, a triple quadrupole may provide fairly good detection limits, but it doesn’t allow you to look for non-targets. This is where the BT 4D really shows its data strength. 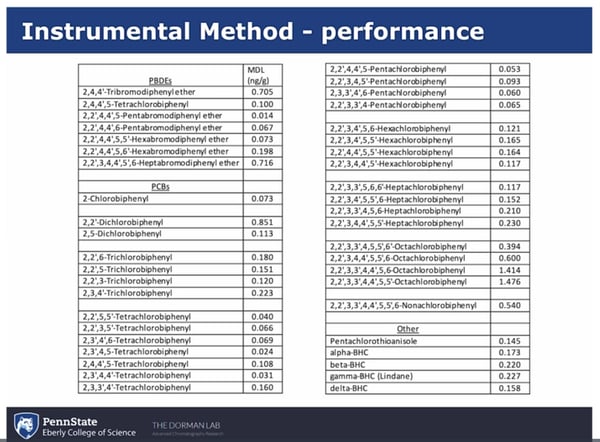 In looking at this data, it is first clear that they were able to achieve method detection limits in the range of 10ths of nanograms per a gram even without sample pre-concentration.  Secondly, Frank reminds us that though you may be used to seeing a little bit better detection limits, these are very strong results considering the lack of sample preparation. This is a direct nod to the chromatographic power of the Pegasus BT 4D. Frank and his team do not need to concentrate their samples even when it is an extraordinarily complicated matrix of whole fish, all that is needed is a simple one-minute extraction then pulling solvent off. This not only saves his team time and increases their productivity, but it also saves valuable lab resources.

Using the data processing tools of ChromaTOF allowed for the comparison of the top 50 features based on Fischer Ratios following Stat Compare of effected versus control samples. As you can see from the previous image, it shows very nice, clear separation between three fish groups: the control, the diseased Juniata River, and the diseased West Branch River samples. The Pegasus BT 4D allows for these improved detection limits and is a decent start to identifying these targets and non-targeted unknowns without needing to concentrate your sample and considering that the sample matrix is very challenging.

Yet where to go from here? To take his research one-step further, Frank used GCxGC HR-TOFMS analysis (Pegasus GC-HRT+ 4D) to uncover even MORE known unknown compounds. Frank and his team want to be able to identify what these molecules are, yet with GCxGC-TOFMS, they are only finding a handful of targets in the diseased fish. This is perplexing, but Frank urges you to remember that the main area of interest has a massive, complicated fish matrix on top of it. Frank explains that high resolution helps to solve this coelution even further, and that the specificity it provides allows the user to resolve more molecules from each other, looking at alternative ionization and chemical ionization. 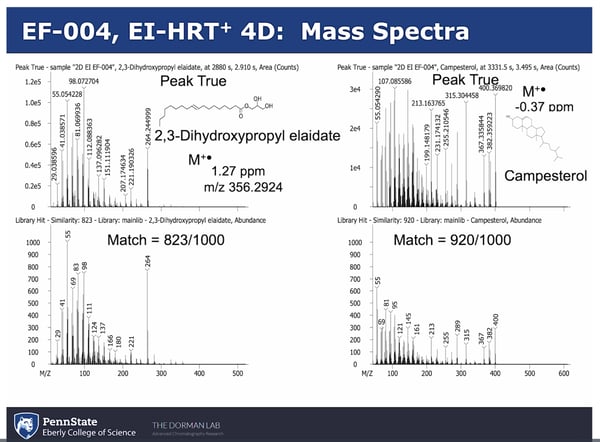 “LECO’s GCxGC-HRT is the solution to Known Unknowns. It provides very, very high mass resolution, 50,000 is not a problem with it. In addition, it acquires that data fast enough that we can actually legitimately record GCxGC analyses. We can directly translate methods off of the BT to the high resolution. So chromatographically we know where they eluted on the BT and where they elute the HRT, so if they find something interesting we know where to look.”

In looking at this high res data in the previous image, the match similarity is quite high and the retention time is in the 3,000 range, allowing them to look directly into the mix of the bad matrix, resulting in nice, clean mass spectra. 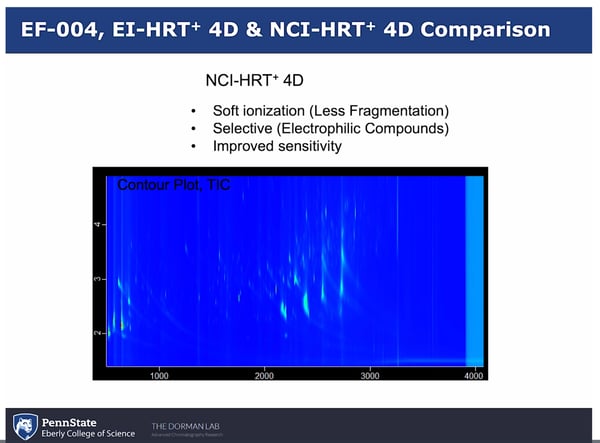 “You look at this as an analytical chemist, and it is really cool…when I saw this slide I was grinning ear to ear…this isn’t textbook, this is REAL.”

Frank and his research group at Penn State continue to deep dive into the mystery that surrounds fish contamination and the outside factors that cause it. Having the analytical power that GCxGC-TOFMS provides along the way is the key to discovering more about this complex environmental issue.

Overall GCxGC-TOFMS and High Resolution TOFMS are valuable tools when answering the question of “What else is in my sample?”. It is clear from Frank’s research that non-targeted compounds continue to have more impact on disease correlation than targets and these technologies are paving the way in new methodology.

Interested in learning more about Frank’s results? Check out his breakfast seminar recording from this year’s ASMS in its entirety here.