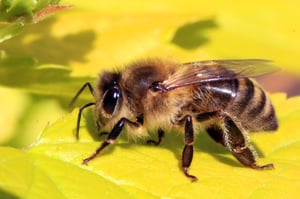 May 20 is the UN World Honey Bee Day. The honey bee is an important pollinator species that contributes an estimated $15 billion a year to the US economy through crop pollination and £690 million to the UK economy. Honey bees are also important wild pollinators and play a key role in maintaining biodiversity and ecosystem services in many ecosystems.

Significant declines in honey bee numbers have been reported globally in recent decades. The term colony collapse disorder (CCD) was coined in the United States to describe unexplained large-scale ongoing losses of honey bee colonies. The declining trend in honey bee numbers and CCD have yet to be attributed to any one cause, but multiple factors have been shown to contribute [1]. Honey bees face numerous disease and pest pressures, and the early detection and treatment of diseases and pests have been shown to significantly improve honey bee colony survival [2].

There are numerous disorders in the form of viruses, fungal infections, microsporidian, parasitic mites, and beetles that affect honey bee colonies and contribute to their decline. However, the most significant are American foulbrood, European foulbrood, and the varroa mite.

In the UK, there are two statutory notifiable diseases which cause significant losses to honey bee colonies. American foulbrood (AFB) (Paenibacillus larvae), a rod-shaped spore-forming gram-positive bacteria, infects larvae when they are fed brood food containing spores. The infection kills the larvae at the pro-pupal stage of development and symptoms include greasy, sunken, dark, and perforated wax cappings and a mucus rope which forms when the cell contents is agitated with a small stick and withdrawn.

European foulbrood (EFB) (Melissococcus plutonius), is a gram-negative lance-shaped bacteria. Larvae become infected when fed brood food containing the bacteria. The bacteria multiply in the larval gut and competes with the larvae for food. The infection does not always kill the infected larvae if there is sufficient food to feed both, which causes the disease to have sub clinical phases where the colony is infected but not symptomatic. Symptoms include melted looking, discoloured larvae which lie in the cells in unnatural positions.

The non-native parasitic mite Varroa destructor is now endemic in the UK and infests honey bee colonies, where the mites reproduce in comb cells and feed on the honey bee pupae, weakening the pupae and the colony as a whole. Feeding mites also infect pupae with viruses such as deformed wing virus (DWV), which further weakens the colony.

In some countries, European foulbrood is a notifiable disease which requires sanitation of apiaries, without the use of antibiotics. This includes the process of burning every infected and weak colony and potentially also destroying contaminated equipment. Identifying the diseases at an early stage can remove the necessity for such drastic action and the use of antibiotics.

In human medicine the analysis of volatile organic compounds (VOCs) has been used in the early detection of diseases such as Parkinson’s and cancer [3,4]. In collaboration with LECO, researchers at Keele University, England are utilising similar research tools in biomarker discovery for earlier disease detection in honey bee colonies and develop new sensors to facilitate more efficient treatment and control methods, slowing the further spread of disease.

This research aims to sample the VOCs of healthy and infected honey bee colonies in the field using both MonoTrap™ and Pye entrainment with tenax tubes. Sampling will be undertaken over multiple seasons to monitor shifts in the natural variations in the volatile profiles of healthy and diseased colonies. Laboratory sampling of the VOCs of diseases, pests, bees, equipment and hive products will be undertaken to compile a honey bee VOCs library with volatile profiles characterised by GC-TOFMS in collaboration with LECO instruments and their Pegasus BT analyser. Multivariant statistical analysis of peak / ion pairs will be used to identify the volatile profiles, with the ultimate goal being the identification of disease and pest biomarkers and the development of a field-based diagnostic tool for the early detection of honey bee diseases and pests.