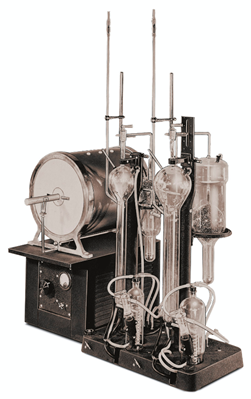 Efficiency. Accuracy. Speed. Precision.  Since 1936, LECO has been dedicated to finding solutions, whether that meant inventing something completely new or solving supply chain issues during times of war. The story begins with three brothers-in-law and their determination to improve determination.

In the 1930s, steel was a prominent industry in the United States: a prominent industry with a major problem. At the time, there was no efficient way to determine the amount of carbon in steel. This was an important calculation, as too much carbon made for a brittle product, while too little left the steel weak. A "wet" chemistry method was used in foundries, but this often took upwards of 20 minutes.

George Krasl and his brother-in-law, Joseph Sauer, developed the first rapid carbon determinator, an instrument that could provide accurate carbon determination in just ten minutes. The third brother-in-law, Carl Schultz, recognized the impact this would have on the steel industry and began to market their creation. The Laboratory Equipment Company had begun, in a barn in Benton Harbor, Michigan, in 1936.

Very quickly, virtually every steel foundry in North America had a demand for a LECO carbon determinator. The three brothers-in-law moved their business first to an old cigar factory in Benton Harbor, and then began construction on their new facility in neighboring Saint Joseph, Michigan, in 1945.

Meanwhile, Carl Schultz was continuing to expand LECO's offerings. Accurate chemistry, he realized, was the key to quality, consistent product development. He applied this realization to all sorts of industries, branching out from steel into ores, cements, fuels, agriculture, food, and so much more.

During World War II, ceramic combustion ware and scientific glassware could not be imported. Rather than letting this negatively affect LECO, Carl Schultz instead began manufacturing our own ceramics. This production carries on to this day, with nearly all of the ceramic crucibles, boats, and glass tubing used in our instruments manufactured in LECO facilities in Saint Joseph and Benton Harbor.

In 1966, Carl Schultz passed away from cancer. He left his portion of the business to his only child, Elizabeth Warren, and her husband, Robert Warren. Upon George Krasl's death in 1976, Robert Warren was named the President of LECO Corporation.

Under Robert Warren's guidance, LECO expanded globally, developing over 25 subsidiaries serving more than 75 countries with LECO products and support. LECO Africa was established in 1976, to serve the entire Sub-Saharan region, with offices in Gauteng, Western Cape, Mpumalanga and KwaZulu Natal, and distributors in the Eastern Cape, Namibia, Ghana, Tanzania, and the Democratic Republic of Congo.

In 2016, Robert Warren retired and turned the company over to its third generation of leaders, his sons, Chris and Carl Warren, who are the co-Presidents of LECO Corporation today. LECO has expanded from three brothers-in-law to over 1400 employees, of which about 550 live and work in the Saint Joseph/Benton Harbor global headquarters region. Many of these employees still make life-long careers at LECO, with an average employee retention of 20 years.

Today, 85 years on from that world's first rapid carbon determinator, LECO continues to develop new products. We combine our 85 years of experience with tomorrow's technology, our employees' dedication, and our founders' vision to continue to empower laboratories all across the world. Today's laboratories are constantly being pushed to do more with less—less time, less labor, less resources—and LECO remains determined to find solutions. 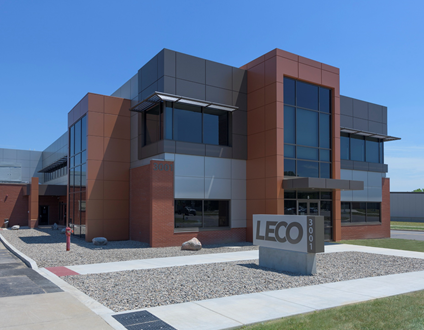